You simply cook the pasta under pressure, add the milk, an egg the egg is optional but suggested , and cheese. Some people make their mac and cheese with shells. Others make it with penne. Some reach for ziti. Not only do I love the way this shape hugs the cheese sauce, it also cooks perfectly in a pressure cooker without coming out crunchy or, even worse, gummy. If you follow a gluten-free diet, use Barilla elbow pasta.

It cooks nicely and reheats really well without getting weird and crunchy. For some reason, I found this ingredient to be a pain. I rarely keep evaporated milk in the house. I tried the recipe with whole milk. I tried it with half and half. I tried it with a mix of both. And I went to the gym a LOT. None of those ingredients worked as well as the can of evaporated milk. All half and half made it too rich.

The combination of whole milk and half and half was actually pretty good.

But having to have both whole milk and half and half was more of a bother than a can of evaporated milk. So evap milk it is! A bowl of macaroni and cheese must be a rich creamy affair. This recipe is no exception. It adds a custard-like note to the cheese sauce without making it eggy. If not, I encourage you to add the egg. It takes the recipe from excellent to heavenly.

I like a combination of Cheddar and Colby-Jack. The Cheddar brings the flavor and sharpness, while the Colby-Jack brings a delicate creaminess. For me, no other combination tastes as good. And this is one time to skip the extra sharp or aged Cheddar cheeses. If you have the time, I recommend grating your own cheese. The pasta is the only ingredient that gets cooked under pressure. To cook, combine the pasta with water, salt, and butter.

Yes, butter. Not only does the butter add richness to the noodles, it also prevents foam from forming as the pasta cooks. Thanks to the speed of the pressure cooker, the pasta cooks in only four minutes under pressure. Remember, it will take time for the machine to reach pressure. So allow for that. After the cooking cycle completes, the pasta needs to rest in the pressure cooker for one minute before releasing the pressure. If you use an Instant Pot like I do, the keep warm cycle kicks on and the display will read L If the pasta sits for longer than that, it can overcook.

Release the pressure using a quick release. Give the pasta a stir. It should look like buttered noodles. I always try a noodle or two… for research.

Then add the evaporated milk and egg. The mixture will look very thin at this point. Stir, with the keep warm setting on, for about two minutes. A whole egg cooks at around degrees F. The heat from the pasta and the keep warm setting reach that temperature easily. Be sure to stir during this process or the milk mixture can get curdled and clumpy. As soon as the mixture thickens, start adding the cheese. If you cook the milk too long, it can overcook and get too thick. After cooking the roux, you add the cheese slowly to prevent it from breaking and turning oily.

If you were to dump eight ounces of cheese in at one time, the temperature of the pasta would drop quickly and the cheese would only sort of melt. Select browning and simmer until sauce has thickened and pasta is tender, 1 to 3 minutes. Turn off pressure cooker, stir in cheddar and Monterey Jack cheeses, a handful at a time, until cheese has melted and sauce is smooth.

It is important to do it a handful at a time so the cheese doesn't clump together. The sauce will thickens as it cools. It looks like too much liquid, but the pasta really soaks it in. Disclosure: I was sent a free copy of Pressure Cooker Perfection to review, but all opinions expressed are always my own. The Sweepstakes Giveaway is over. We are a participant in the Amazon Services LLC Associates Program, an affiliate advertising program designed to provide a means for us to earn fees by linking to Amazon.

Thank you for posting this! I wanted to double this one for a work potluck lunch and came across this site with the recipe already doubled!

Looking forward to trying some new recipes from your site. This was way too soupy. It never did thicken. I ended up taking half the liquid out and adding more cheese. Next time I will use 1 cup of evap milk. Thanks for the follow up Deborah. If something like this happens again, you can use a cornstarch slurry to thicken up the sauce.

Just mix cornstarch with equal amounts of cold water and stir to dissolve. Then add it to the pot and bring it to a boil. Dice up some steamed lobster meat and drop it in after this recipe is finished. Oh, yeah! Thanks for the great recipe, Barbara. I made it tonight but did add a few calories to it … the box of pasta I got was only 12 oz. Using the Instant Pot, I used the saute setting on normal to get it up to boiling after releasing the pressure, then once it was boiling, turned it off and back on with saute, low to finish melting the cheese.

Definitely not the most diet friendly, but once in a while, a great treat. Thanks again for sharing this recipe and all the others you have on your site … love it. Your email address will not be published. Leave this field empty. If you have a smaller box of pasta — 12 ounces and Everything else can stay the same. Serve with a bottle of hot sauce at the table. I have burned a lot of bread crumbs in my day. By a homework meltdown…just to pick a hypothetical example. The breadcrumbs!

Click here for my other pressure cooker recipes. Want to help out DadCooksDinner? 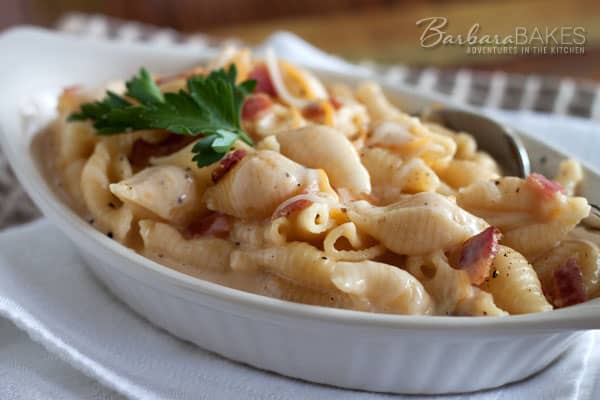 Thank you. Should I alter the liquid used or the cooking time at all? Hands down the tastiest Mac and Cheese ever! I brought my IP to a party and whipped up a batch of your Mac and Cheese and people just love it. I put crushed croutons on top instead of toasted bread crumbs! Made this last night — it was great. And you are right about the spatula. We used a wood one and it was tough to clean. What brand of silicone spatula do you recommend? It is almost identical, but healthier and was less expensive.

Made mine gluten free with chickpea spiral pasta from Costco. Also added brisket burnt ends also from Costco when adding the cheese and milk. Thanks for the awesome recipe. Any idea on how to make it ahead of time and keep it warm? Think it could go in a crock on warm for a couple hours?